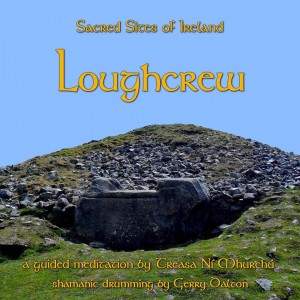 Loughcrew cairns are more than 30 neolithic passage tombs, located near Oldcastle, on the border of counties Meath and WestMeath.  The word cairn literally translates as heap or pile and this is what the cairns appear to be externally, a heap or pile of stones.  The Loughcrew cairns are believed to be over 5 thousand years old.  They are situated on three hills, known collectively as Slieve na Caillaigh, the Hills or Mountains of the Hag, the Hag is sometimes known as the Crone or the Witch.

The entrance to cairn T on Carnbane East is aligned with the sunrise on Spring and Autumn Equinox and the sun shines in illuminating the rock art on the decorated rear stone of the west chamber. Cairn T has an entrance passage facing east and three cists or chambers, to the south, west and north.  The chamber to the north backs on to a stone called the Hag’s chair, one of the kerbstones of the cairn.  This stone is a very unusual shape and has rock art on the rear side, although this cannot be seen because the stones of the cairn are piled up against it, which makes you wonder who this art was originally made for?  The Hag’s chair and the direction it faces, north, the direction of winter, are most strongly associated with the cailleach.

Cairn L on Carnbane West has a solar alignment on Imbolc and Samhain, when the sunrise shines in and illuminates the white standing stone in the cairn, this standing stone is sometimes called the white whispering stone.  This cairn is beautifully decorated with cup marks and other forms of rock art and has six chambers and two basins.  The land it is on is currently in private ownership with no public access.

The Cailleach, or the Hag appears in many places in Irish legend.  She is strongly associated with the Beara peninsula in county Kerry, where she is known as the cailleach bheara.  The cailleach is sometimes associated with the crone aspect of the Morrigan, the Great Warrior Queen of the Tuatha de Danann.  Although the cailleach predates what we know of the Morrigan, the archetypal crone energies of the two would be similar.  Legend has it that the cailleach hopped from Carnbane East to Carnbane West with a great apron full of stones, dropping them as she went and the stones formed the cairns.  She reputedly fell and broke her neck hopping to the third hill, Patrickstown Hill and is meant to be buried there, although most of the cairns on this hill are long vanished and the outer stones removed.

Eugene Conwell, who named the cairns believed Cairn T to be the tomb of the legendary ollamh fodhla, the learned lawgiver, and described Cairn T as such in his 1872 book on Loughcrew. It was Conwell that counted and numbered the cairns.

Lugh Lamhfada, Lough of the Long Arm, high king of the Tuatha de Danann, God of Light and God of the Harvest was the foster son of Queen Tailtiu, and as such spent time at Loughcrew.  Some historians believe Loughcrew to be the pagan cemetery of Tailtin.  Telltown, or Tailtin is named after queen Tailtiu and Lugh started the Telltown games at Lughnasa in her honour.  The raven is connected with both Lugh and the Morrigan and is associated with battle, protection, wisdom, prophecy and magic.

For this meditation we will be visiting Cairn T, connect with the energy of the cailleach, have our energy field cleared by the ollamh fodhla, and fly with a raven to Cairn L where we bond with the energies of spirit and the ancestors through the power of the white whispering stone and the esoteric symbolism of the sacred rock art.