Samhain, now known internationally as Halloween, originated in Ireland. It is celtic new year, the time of year when the veil is thinnest between worlds and it is easiest to contact the otherworld.

Visit the Morrigan in her cave at Rathcroghan, light the sacred Samhain fires at Tlachtga and watch the Samhain sunrise at the Hill of Tara. 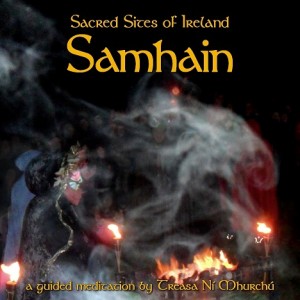 Samhain originated in Ireland and the date falls astronomically around the 7th of November, although it is now known internationally as Halloween and celebrated on 31st October. It is Celtic New Year and is the time of year when the veil is thinnest between the worlds and it is easiest to contact the dead. Samhain traditionally is a time for remembering and honouring our ancestors that have passed on to the otherworld.

There are a number of Samhain sites in Ireland, the first being Rathcroghan cave in Co. Roscommon, also known as Cruachan or Oweynagcat, the cave of the cats, the entrance to the otherworld from whence the Morrigan is meant to come forth on Samhain night. Caves are liminal, or in between places as are lakes, bogs, mountain tops, dawn and twilight, where it is easier to move between this world and the otherworld, the world of spirit and of the dead.

The Morrigan, the Great Warrior Queen of the Tuatha de Danann, sometimes known as the Queen of Darkness is a triple goddess, appearing as maiden, mother and crone. She is a shape shifter, sometimes appearing as a heifer, a wolf or a raven. She is mentioned as a powerful magic user and warrior of the Tuatha de Danann at both the Battles of Moytura and appeared to Cuchulainn in various guises and shapes before prophesying his death as the washer at the ford and alighting on his shoulder as a raven as he died. She was also said to be the consort of the Dagda, the all father, god of the earth.

Tlachtga, the Hill of Ward, just outside Athboy in Co Meath is also a Samhain site, known as the birthplace of Halloween. It is here that the Samhain fires were lit, and pilgrims would come from all corners of the country, to celebrate the new year, to honour their ancestors that had passed over and to take fire from the sacred Samhain fires of Tlachtga to rekindle the fires they had extinguished in their homes. This tradition is still alive today, with the Samhain Festival being held at Tlachtga on Halloween night, the sacred fire is lit, the story of the Goddess Tlachtga is told and people take the flames of the Samhain fire to the Hill of Tara, fifteen miles away.

Tlachtga, whose name means lightning bolt, was the daughter of Mog Ruith, the druid. Her father and Simon Magus, the magician sent Tlachtga all over the world to collect the magic and knowledge of all the peoples for them. When Tlachtga returned they realised that she had the knowledge and the power, not them and they were jealous of her. She was assaulted by Simon Magus’s sons and she returned to Tlachtga, pregnant and gave birth to three sons on the hill on Samhain night. She named her sons Dorb, Cuma and Muacth and said that as long as their names were remembered Ireland would be free. She died on the hill and all the magical power and knowledge flowed out of her and back into the earth.

The passage tomb known as the Mound of the Hostages or Duma na nGiall at the Hill of Tara is aligned with the Samhain sunrise, with the sunlight hitting the stone at the rear of the passage on Samhain morning and also at Imbolc. The Mound of the Hostages was excavated in the 1950’s by archaeologists from University College Dublin. It is believed to date back to around 3500 bc, with burials continuing over time and the excavations yielded evidence of cremation burials of more than 250 individuals in the main tomb and over 60 individuals in the three cists outside the main tomb. The artefacts discovered included a ceremonial battleaxe; bronze daggers; jewellery and urns.

Some believe that Teia Tephi, the fabled Queen of Tara of the royal line of King David of Jerusalem is buried in a subterranean chamber underneath the mound of the hostages.

For this meditation we shall be visiting the Morrigan in her cave at Rathcroghan, lighting the sacred Samhain fires at Tlachtga to remember and honour our ancestors and carrying the sacred flame to the Hill of Tara where we will watch the Samhain sunrise at the Mound of the Hostages.